The Introduction to Food Based Dietary Guidelines

The current global health disaster COVID-19 (also commonly called coronavirus) pandemic, is an “important moment” to ask ourselves about the levels of immunity among individuals. These questions come in the form of “how come most people who are carriers of the virus do not succumb to the illness? While about 5 to 10% do and yet a lesser number succumb to death? Even young people have died of COVID-19.” While most health professionals are required to be involved in the cure of COVID-19 out of necessity to control the pandemic, other professionals and communities need to dwell on the important action of building weakened immunity among the masses. While no foods or dietary supplements can prevent COVID-19 infection, maintaining a healthy diet is an important part of supporting a strong immune system.

Undernutrition is well understood to impair immune function, whether as a result of food shortages or famines in developing countries, or not eating correctly regardless of one being rich or poor. Some micronutrients and dietary components have very specific roles in the development and maintenance of an effective immune system throughout life.  For instance, the micronutrients vitamin A, D, B6, B12, folate, iron and zinc regulate production, and development of new immune cells, which are essential for a successful defense against invaders.  Furthermore, antioxidant nutrients vitamin C, E as well as the minerals iron, copper, zinc and selenium protect immune cells from stress caused by invading foreign bodies.

Planning ahead what one eats is a practical way to reach good health. The behaviour that people need to follow when planning and preparing meals have been presented to the public by the Ministries of Health in countries through easy to remember messages in the form of Food-Based Dietary Guidelines. A food Based Dietary Guideline accompanied by a graphically explicit symbolic “food guide.”  These are designed based on the results seen (evidence) in good health and nutrition by following such guidelines in other settings. Multiple factors such as what food is affordable, easily found at the local level, taste, culturally acceptable, produced with the least harm to the planet (ecofriendly) and minimally processed are also considered when formulating these guidelines known as FBDGs. When clear, simple and specific messages are memorized, these facts at our fingertips are easily converted to actions.

Country specific Food-Based Dietary Guidelines (FBDGs) for the masses are one of the FAO/WHO recommended tools to improve healthy eating habits and lifestyles of individuals and populations. FBDGs were also endorsed by countries including Sri Lanka in the Framework for Action agreed at the Second International Conference on Nutrition.

Compounding what is stated is the fact that many countries in the world are now also facing an overlapping ‘triple burden’ of malnutrition.  The coexistence of over-nutrition, under-nutrition and micronutrient deficiencies are common and they increase the risk of various health problems. Globally, unhealthy diets combined with sedentary lifestyles, are the number one risk factor for disability and death from non-communicable diseases. Unhealthy diets caused one in every five deaths globally in 2017. Over-nutrition is associated with increased risk of non-communicable diseases such as obesity, high blood glucose levels, raised blood pressure, deranged lipid profiles and various cancers at an onset from a young age irrespective of the socioeconomic strata. Proper nutrition throughout the life cycle of a person is vital to overcome such adverse health consequences and to improve quality of life. A healthy diet also helps to boost immunity. The Food and Agriculture Organization of the United Nations (FAO) in 2018, highlights this in the White paper on improving methodology to develop Food-Based Dietary Guidelines, and incorporating sustainability considerations.

Sri Lanka embarked on formulating and communicating the FBDG messages as far back as the year 2000. Currently the FBDGs are being revised by the Ministry of Health and partners based on the situational analysis of health and nutrition of the country, a task supported by FAO and the Nutrition Society of Sri Lanka. If the public follows FBDGs positively and progressively, Sri Lanka will achieve a higher level of health status in the next 5 to 10 years. 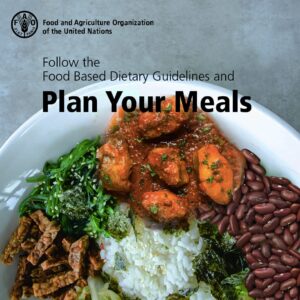 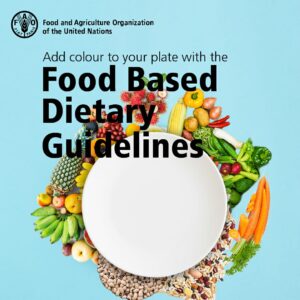 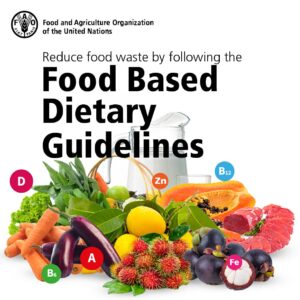 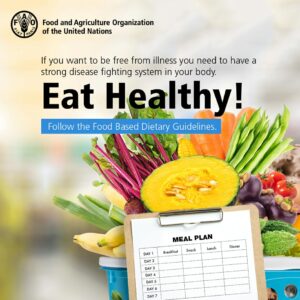 Going back to our roots. Our grandparents’ diet and lifestyle

This fascinating topic takes us to a timeline 40 to 50 years ago and before.

The extended family was intact. So there were plenty of hands to share household chores and quality time to prepare food together from age-old recipes, to eat and to feed children. A number of curries, sambols, chutneys, pickles and short eats were prepared in a day at home. Condiments such as chillie and curry powder were also made at home, sing songs were conducted by family members each evening, newspapers were read in a leisurely manner, family conferences and discussions resulted in reduction of family disputes, gardening was a way of life to harvest flowers, fruits, greens and vegetables, clothes were sewn for the whole extended family and long walks were taken as groups. Even animals were fed by the entire neighbourhood so there was no excess of cats and dogs as these were considered common pets in the community.

Food was eaten as curries in a dish or meals, not from packs or tins. Most importantly there was much less processed and ultra-processed food produced in factories, excluding the odd chocolate, and biscuits.

Home processing ensured that some fibre or bran was left in the food eg: the processing of grain at home with pestle and mortar into flour. This also involved a certain amount of exercise. Chillie powder was ground into a paste, so was curry mix using the grinding stone. Spices were thus freshly made every time and this provided a certain aroma to the food.

Among the aspects of folk life that we find in ancient Sri Lankan folk tales, food is a central item. Paddy cultivation was the primary occupation of the rural folk in the past and rice was a central part of their diet. This was consumed with either meat or fish, vegetables and different types of greens, and fruits were also part of their daily diet. There were substitutes for rice as well such as yams and jackfruit and at least one of their three meals consisted of Rotti, Pittu, and Thalapa. The  people of the past were equipped with both tangible and intangible knowledge as to how to process these food items and it can be seen how at present, various kinds of food have been modernized based on these ancient food recipes.( A study of the food habits of ancient Sri Lankan people as depicted in local folk tales. Ranasinghe, M.L.G.T.T, University of Kelaniya, International Conference on Humanities,2015, http://repository.kln.ac.lk/handle/123456789/7833)

Today, less time is spent preparing meals at home, which means that meals are often less nutritious as people (especially in towns) rely on ready meals, fast food, and street foods. With these foods, being readily available in the market and often affordably priced, overweight and obesity have seen a sharp rise especially in childhood. According to the Food and Agriculture Organization of the United Nations (FAO), globally 40 million children under five years of age are overweight while over 120 million boys and girls (age 5 -19) are obese. In Sri Lanka, prevalence of overweight and obesity in schoolchildren and adults has increased. For instance 45 percent of women of reproductive age (15 – 49 years) are either overweight or obese.

In the past, home remedies as preventive measures were taken in the form of herbs for detoxing such as aralupethi, cleaning the throat with lime and pepper on a swab of cotton wool, drinking concoctions of pas panguwa or coriander each night before going to bed. The entire family took deworming medications once in two months or so. Come COVID-19, the value of these simple measures have been exalted and turmeric was bought out of shops as the key antiseptic.

The east has known the value of chillie, paprika, turmeric, dill, fenugreek, cumin, curry leaves, cinnamon, cloves and cardamoms for generations, long before the scientific evidence on aromatics was published. Tamarind and neem were considered godly protectors of good health.

What does all this signify? Living in harmony with nature, in its bounty and the emphasis on a sustainable diet. A sustainable diet consists of using resources that are regenerated and replenishable using less energy and water to produce. The sustainable diet includes a lot more plant based foods in a wide variety. Tables were weighed down with a variety of fruits, vegetables, greenery, animal source food and spices which contained a wide range of vitamins, minerals, antioxidants and other phytonutrients which helped boost immunity.  Meals were planned and larders were full of food.

Food Based Dietary Guidelines (FBDGs) create the platform to go back to our traditional diets best suited to the genes inherited from our forefathers and mothers. These would include messages on enhancing the variety in the diet especially with regard to the inclusion of varied plant material, both popular fruits and vegetables as well as those underutilized such as woodapple, lavalu, different types of gourds, and different types of greens made in a variety of ways.These underutilized crops referred today as Future Smart Foods such as woodapple, jackfruit, snakegourd, drumstick (murunga), sweet potato and various types of pulses; cowpea, black gram, soybeans are ‘hidden treasures’ that offer tremendous opportunities for fighting hunger and malnutrition.

Currently the FBDGs are being revised by the Ministry of Health and partners based on the situational analysis of health and nutrition in Sri Lanka, a task supported by FAO and the Nutrition Society of Sri Lanka.

Even though life expectancy has increased on average, this can be attributed to advances in the health system and medication. But those who lived up to a very advanced age are fewer in number today. These people who lived up to their nineties or beyond 100 did so on natural living without much dependency on pharmaceuticals artificially made, vaccines nor processed food.

So let us plan our diet based on sustainability, with variety restored with fresh produce and condiments sourced from one’s own home garden and the local environs. 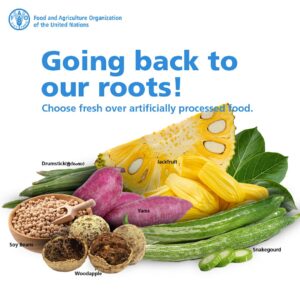 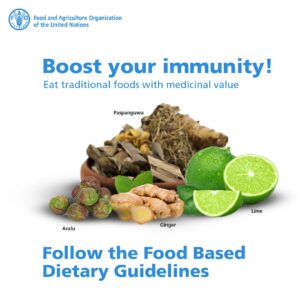 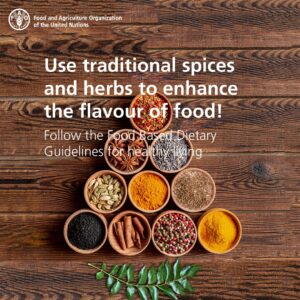 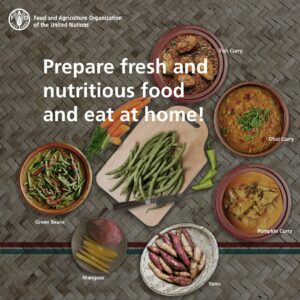 Fruit and vegetables fall into five different colour categories: red, purple/blue, orange, green and white/brown. Each colour carries its own set of unique disease fighting chemicals called phytochemicals. It is these phytochemicals that give fruits and vegetables their vibrant colour and of course some of their healthy properties.
The Food-Based Dietary Guidelines provide country-specific advice on foods, food groups and dietary patterns to provide the required nutrients to the general public to promote overall health and prevent chronic diseases.
Daily Mirror Press Release : More colour on my plate – more nutrients 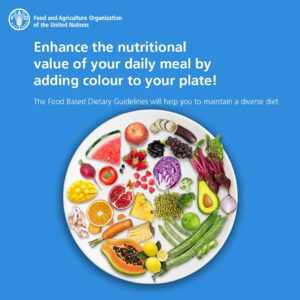